Morse Decoder can be used by Ham Radio operators or anyone else interested in decoding Morse code from a Radio or any other device. Morse Decoder includes a “waterfall” to show a frequency spectrum of about 50Hz to 2300Hz. A narrow band DSP filter can be set for the frequency of the Morse code tones by tapping the waterfall. The DSP filter is followed by an automatic gain control (AGC) to compensate for changing signal strengths.

The detected signal will be shown as a graph and several algorithms will then detect the speed of the Morse code and convert them into readable text. Speeds of less than 4 Wpm (Words per Minute) to more than 50 Wpm can be decoded. 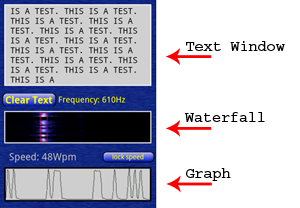 Place your Android device against the speaker of the radio or the device which transmit the Morse code. If there is a tone present the waterfall will display a blue or white vertical line (As stronger the signal as brighter the line) Slide the red rectangular on top of the vertical line. Even though Morse Decoder uses a 200Hz wide AFC (automatic frequency control) it is recommended to move the slider always on top of the vertical line. It may take several initial characters containing both dots and dashes before the WPM speed estimation acquires the actual Wpm and decodes the characters correctly. 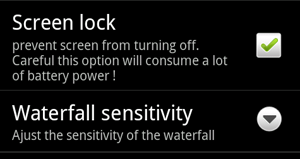 Screen lock: Prevents the screen from turning off. CAUTION: this option consumes a lot of battery power.
Waterfall sensitivity: Some Android devices have very sensitive built in microphones others are very deaf. The decoding algorithm uses an AGC but the waterfall sensitivity can be adjusted in the settings.

After weeks of programming I finished a new Android App – HF Weather Fax.
HF Weather Fax for Android decodes weather fax 120/576 charts and satellite images through the microphone of your Android phone or tablet.
Learn more about HF Weather Fax

DroidNavtex is able to decode NAVTEX messages from your receiver through the phones/tablets microphone or through a connected interface.
Special audio filters even decode very weak signals through the microphone and make DroidNavtex a very affordable alternative to high priced decoders. Learn more about DroidNavtex